Examination of the three ships carrying Mayo orphan girls to Melbourne and Sydney indicates that there were a number of sisters in the workhouses.

In two cases there is the possibility that sisters were sent from Ballina workhouse, in two different ships, to two different cities.

There were also 13 cases of sisters travelling together (note that parents’ names were not recorded for the Lady Kennaway, so for this ship an assumption is being made).

Where the place of first employment is known, it is revealed that the sisters were not separated on arrival; each was with the other sister in the same place (Tables 1-3): 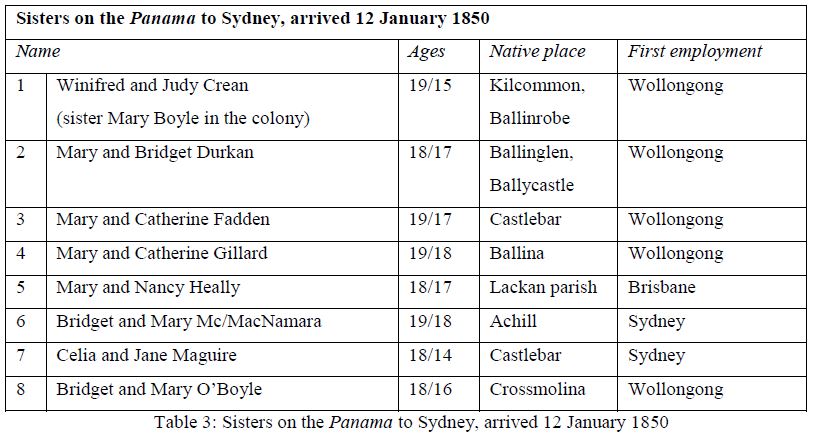 Each of these 13 cases represents a different situation when considering the girls’ experiences of emigration.

Most girls in the Scheme had lost both parents, and it is likely that siblings may also have died, or they may have remained in the workhouse. Yet for the 13 cases above, their sister was with them, not only for the journey, but in their new place of employment. It could be presumed that for most, this must have made the journey and experience somewhat easier.

The story of Catherine Gillard of the Panama, however, indicates that sometimes not even having a sister with you is enough to keep you from despair.
© Barbara Barclay (2015)